An Interview with Historian Susan L. Palmer ’71 on AU’s Early Years in Mendota 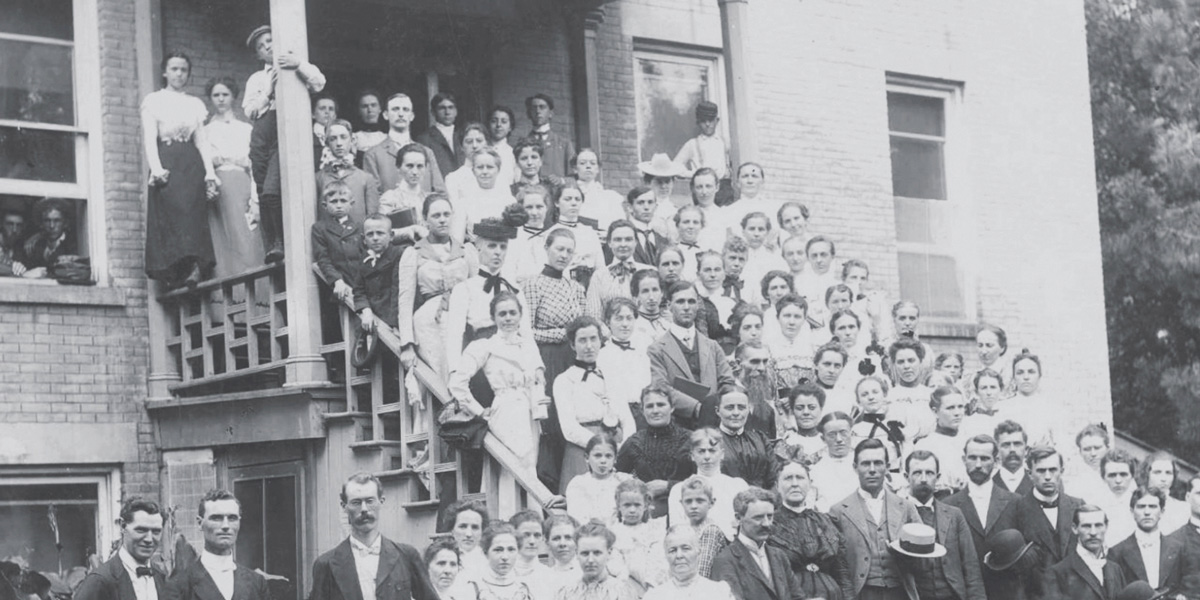 In 2005, Aurora University President Rebecca L. Sherrick turned to Susan L. Palmer ’71, a longtime history professor at AU, with an invitation to write the story of AU’s founding.

As Palmer set to work, she discovered a treasure trove of information among the papers in the university library’s Jenks Memorial Collection of Adventual Materials and the university’s archives — a cache of student publications, catalogs, newspapers, photos, and other original source material about college life at the turn of the 20th century.

The project soon developed into a book entitled “‘Occupy till I Come’: The Origins of Aurora University in Mendota, Illinois, 1893–1912” published in September. The book tells the story of AU’s early years as Mendota College, a Bible college created to prepare Advent Christians for the ministry, an education that included the liberal arts along with religious studies. The small, financially vulnerable Advent Christian school had a brief existence, only 19 years (1893–1912), before moving to its current home in Aurora to become Aurora College, and later Aurora University.

Q: How would you describe this book?
A: The story of Mendota College is not just about how an institution grew and matured academically. It is a very American story about how a religious group founded and shaped a college that would gradually become a much larger, more stable, secularized, four-year school with graduate programs, but that in its formative years was thoroughly religious in nature. Religion was its reason for being and was intertwined with virtually every aspect of the school.

Q: Tell us about the title, ‘Occupy till I Come.’ How did you choose it?
A: This was something that Jesus said, which was used by William Miller, a New York farmer who founded the 1840s Millerite Movement that preached the imminent return of Christ. Some people wanted to give up their jobs and possessions and simply await Christ’s return. Miller used this Bible verse to convince them to continue with their normal lives till the end. The Advent Christian denomination, one of whose publication societies founded the college, grew out of the Millerite Movement (along with several other denominations).

When the creation of a college was being discussed in the early 1890s, some people argued that Adventists should not create such a permanent institution because of their belief that Christ would return soon. Those who believed in the need to establish a college went back to their Millerite roots by using the argument about occupying — doing God’s work till the end. This verse shows up in school sermons, speeches, and publications throughout the Mendota era, so I thought it was a good representation of Mendota College’s mission.

Q: Your roots run deep in the Adventist movement as well. How did those roots affect how you approached this project?
A: I grew up in an Advent Christian home with Adventist roots going back four generations, so I already knew a lot about the denomination and have empathy for some of its beliefs and its earnest sense of mission about bringing others to God. On the other hand, I am no longer Advent Christian and am a trained historian, so I would like to think that, as an outsider, I was able to approach this topic with a wider lens. I tried to put the history of the college, denomination, and Millerism within the broader context of American history. Writing this book gave me both greater insight into my ancestors and a more nuanced understanding of American religious history.

Q: Are there lessons from AU’s early years that are applicable for us today?
A: Absolutely. Although the school is no longer Advent Christian, it too has a strong sense of mission and works to ensure that students receive something greater than just training for a job — a greater sense of the world in all its diversity and struggles and a greater ability to think critically and help solve its many problems. As Mendota’s students were, AU individuals are nourished as such, but they also are encouraged to see themselves as part of something larger, as servants to the larger society.